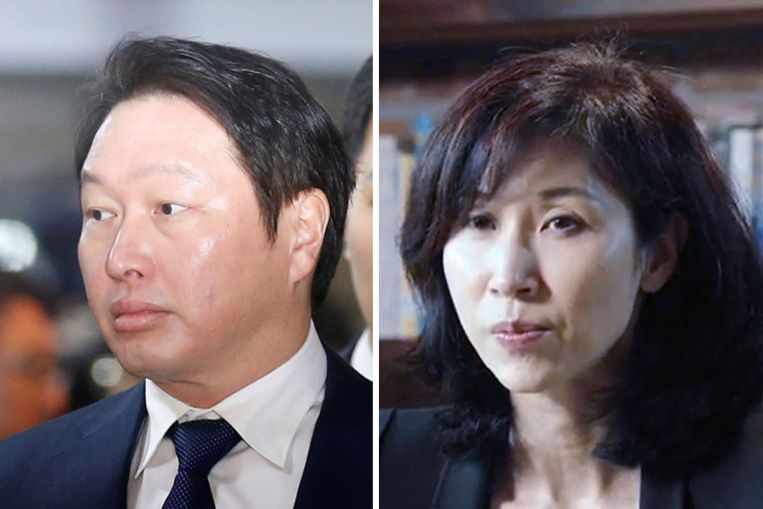 A new female billionaire could emerge from what may turn out to be one of Asia’s biggest divorce settlements.

The shares Ms Roh is asking for are worth US$1.2 billion (S$1.6 billion) based on yesterday’s mid-day trading price in Seoul and – should she win the case – the settlement would make her the second-biggest shareholder of the company after Mr Chey.

The 59-year-old currently has a fortune of US$2.8 billion after excluding the shares he has pledged as collateral, according to the Bloomberg Billionaires Index.

Ms Roh, the daughter of former South Korean president Roh Tae-woo, could not be reached for comment.

Mr Chey has led South Korea’s third-largest conglomerate, which has business interests spanning memory chips to telecommunications, since his father – the brother of the late founder – died in 1998.

Mr Chey had sought a divorce settlement mediated by the courts in 2017 but as the couple failed to reach an agreement, the case went back to court, according to Yonhap news agency.

In 2015, Mr Chey sent a three-page letter to local newspaper Segye Ilbo, revealing he had a child born out of wedlock and expressed his intention to split from Ms Roh.

Mr Chey Tae-won’s current fortune, excluding the shares he has pledged as collateral, according to the Bloomberg Billionaires Index.

In a Facebook post after filing her suit, Ms Roh signalled that she was ready to move on after years of waiting with “hope” to patch up the marriage.

“But now I don’t see hope anymore,” she wrote in the post. “I now think it’s right to let my husband go find the happiness he wants so desperately.”

Expensive divorces have created enormous fortunes in other parts of the world.

Ms MacKenzie Bezos and Amazon.com founder Jeff Bezos divorced earlier this year, leaving her with a 4 per cent stake. That makes her the world’s fifth-richest woman with a net worth of US$35.4 billion, according to the Bloomberg index.

Mr Chey and Ms Roh met while studying at the University of Chicago and married the same year Ms Roh’s father was inaugurated as president of South Korea in 1988, local media had reported then.

They have a son and two daughters.

Ms Roh said in her Facebook post that she will dedicate the rest of her life to “ways to contribute to the society”.