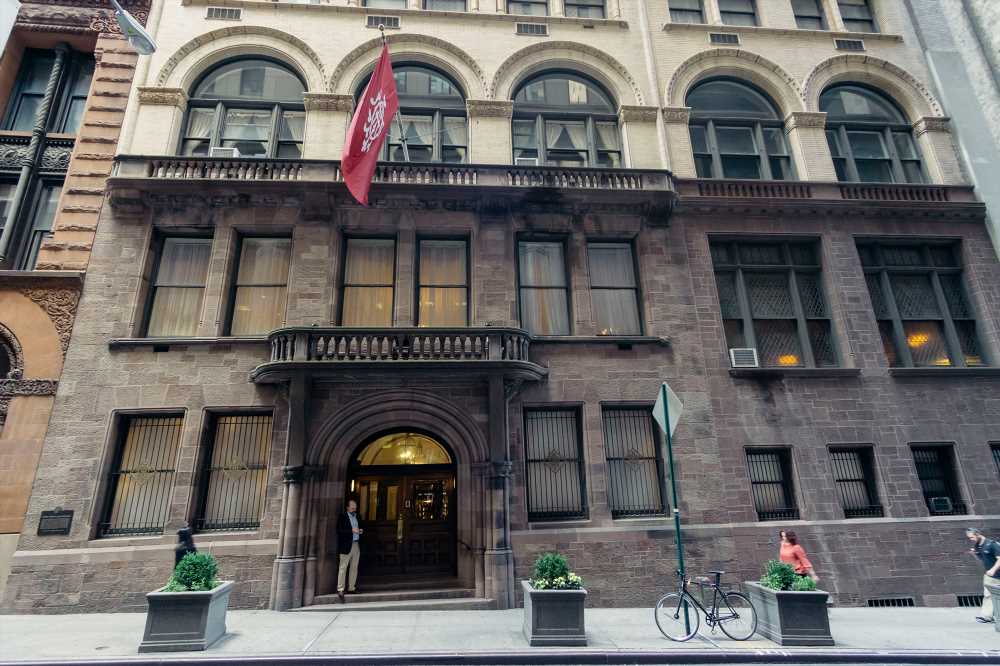 A blueblood Wall Street-area social club wants to raise the roof of its century-old, landmark headquarters at 60 Pine St.

It would put the storied organization on firmer financial footing by letting it use less space in the building to make room for a fancy new hotel.

But some members of the Down Town Association are down in the dumps over a possible two-year closure that would force them to find alternate places to meet and eat around town.

But the Association, whose past members have included Franklin D. Roosevelt, former New York State Gov. Thomas E. Dewey and statesman John Foster Dulles, couldn’t build due to tough financial times. Now, under a deal being negotiated, its landlord would build the new floors and use them and part of existing floors to create a high-end boutique hotel.

The hotel would be run by an outside operator yet to be named.

The Association no longer needs all of the building’s 57,000 square feet, and reducing its space would save it what a source called a “significant” percentage of its current rent, although it isn’t known how much it’s paying.

The Romanesque Revival-style structure stands in the shadow of next-door 70 Pine St., the landmarked Art Deco skyscraper that was converted from offices to apartments by Rose Associates — and where the Association leases 33 members’ bedrooms on the tower’s second floor.

The 60 Pine St. building was designed by prominent 19th Century architect Charles C. Haight and opened in 1887. It was expanded in 1910 by Warren & Wetmore, the architects of Grand Central Terminal.

But the club was beset by rising costs and reduced dues from a shrinking membership.

According to its 2017 tax return posted on the state attorney general’s charity registry, expenses that year exceeded revenue by $4.02 million, twice as much as in 2016.

In 2018, the Association sold the building for $28 million to Great Empire Realty — an obscure partnership which club members refer to as “the doctors.”

A source said it is not the firm of the same name run by Chinatown developer Benny Fong, as was widely reported at the time.

The club leased the building back from the buyers. The deal brought the Association much-needed cash as well as a $4 million line of credit.

The club even installed a new gallery where works by Andy Warhol, Willem de Kooning and Paul Gaugin are on display.

So members were stunned in 2019 to learn of the hotel-building plan, which would force them to find other facilities until the job was finished. The landlord would use the three new floors as well as parts of other floors for a 66-room luxury inn.

“Not all of us were happy with the sale and then the hotel came out of the blue,” one source told us.

In September, the Landmarks Commission again blessed the expansion. It noted that many social clubs “have a tradition of expanding with rooftop additions” and that the 60 Pine St. extension “will be set back from the primary facade and will not be visible” from the street.

The redesign would relocate within the building some of its major historic features including its dining room, bar, and reading room.

A stylish, ground-floor bar for hotel guests would be added to the first floor, which club members could use at discounted prices.

Club trustee Thomas Boucher, a managing director of investment-management firm Ingalls & Snyder, cited some members’ fears that they “wouldn’t receive full value” of their dues for 2020 if the club shut down before year’s end.

No start date has been set for construction.

But Altherr promised that members “will be treated fairly during closure through credits upon reopening and with use of other places.”

The Association has reciprocal arrangements with other clubs, including the Harvard, Yale and Lotus clubs in Manhattan.

Neither Altherr nor representatives of Great Empire Realty could be reached for comment.

Email ThisBlogThis!Share to TwitterShare to FacebookShare to Pinterest
Labels: Association, Down, looking, Town