DUP signs up to deal to restore Stormont Assembly 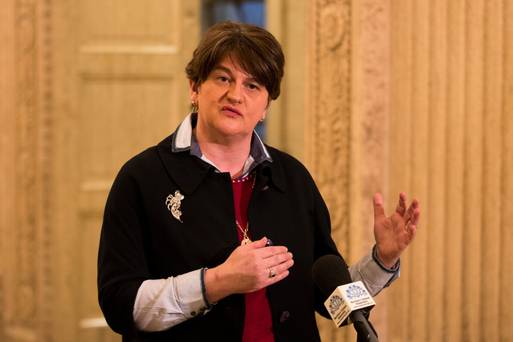 The Stormont Assembly is on the verge of being restored, with the DUP leadership signing up to a new deal to restore power-sharing.

The Irish and UK governments last night published proposals to break the deadlock that has gripped Northern Ireland for three years.

But Mr Coveney said that the Northern Irish people needed to tell their politicians to take the opportunity and seal the deal.

The new deal to restore the Stormont Executive will mean no single party will be able to wield a veto, and there will be no standalone Irish Language Act.

However, there will be an Irish Language Commissioner and new sections added to Northern Ireland Act 1998 – the law that gives legal force to the Good Friday Agreement – in order to accommodate Irish.

Sinn Féin is studying the document, while the DUP’s party officer team will today recommend to a meeting of its executive and councillors that the agreement be accepted.

DUP leader Arlene Foster said: “On balance we believe there is a basis upon which the assembly and executive can [be] re-established in a fair and balanced way.

“This is not a perfect deal and there are elements within it which we recognise are the product of long negotiations and represent compromise outcomes. There will always need to be give and take.”

Sinn Féin leader Mary Lou McDonald said late last night that her party was “studying the text and will give it careful consideration”. She added: “The Sinn Féin Ard Chomhairle will meet [today] to fully assess it.”

Ulster Unionist Party leader Steve Aiken said they would consider this “complex and far-reaching document carefully and consult widely within our party before making any further comments”.

Northern Ireland Secretary Julian Smith has asked the speaker of the defunct Stormont assembly to hold a sitting this morning, when the fate of the deal will become clear.

He said: “This is a moment of truth for the Belfast/Good Friday Agreement. It is a fair and balanced deal that will ensure key decisions about peoples’ lives can be made.”

Mr Smith said there was a major financial package on offer from the British government. “We have had three years of talks and there is finally a good deal on the table that all parties can support,” he said.

The 62-page outline deal includes a series of priorities for a restored Executive, while part two is called the Northern Ireland Executive Formation Agreement.

One of the major stumbling blocks has been the controversial voting mechanism called the petition of concern.

It was originally designed to protect minorities, but had been used as a veto on issues, such as the legalisation of same-sex marriage. The new deal states there will be “meaningful reform of the petition of concern bringing it closer to its original role, as conceived of the Belfast/Good Friday Agreement and as a means of building consensus. It will not be a veto for any one party”.

The threshold for a petition of concern will remain at 30 MLAs, but will only be triggered by members from two or more parties.

A valid petition would trigger a 14-day period of consideration. After this, if 30 MLAs confirm support for it, the assembly can determine the matter in accordance with a cross community consent procedure.

There will be an executive sub-committee on Brexit “to improve collaboration and partnership and improve the sustainability of the institutions”.

The Irish Language Commissioner will be appointed by the first minister and deputy first minister “as a key element of providing, under statute, official recognition of the status of the Irish language in Northern Ireland”.

They will “protect and enhance the development of the use of the Irish language by public authorities, including by providing advice and guidance, and introducing, supporting and monitoring the use of best practice language standards”.

The first priority for a new government is to transform the health service with a long-term funding strategy.

Email ThisBlogThis!Share to TwitterShare to FacebookShare to Pinterest
Labels: deal, DUP, restor, signs, to, up