Tesla Appears to Turn a Corner, Lifting Valuation to $80 Billion 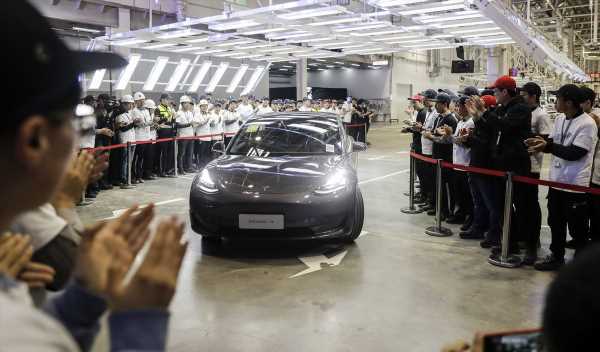 Tesla Inc. is back on top — this time, it seems, with some real staying power.

The Model 3 maker delivered a record 112,000 vehicles in the fourth quarter and has begun production at a new factory near Shanghai. With the stock soaring to close Friday at an all-time high, Tesla’s market capitalization finished the week just short of $80 billion — more than doubleFord Motor Co.’s stock value. And the Model Y, its next crossover SUV, is slated to launch this summer.

“Tesla is close to escape velocity,” said Gene Munster, managing partner of the venture capital firm Loup Ventures. “Demand for electric vehicles is real, and people are stretching to buy a Model 3. Everything is beginning to gel.”

That’s saying a lot for a company famous for taking big steps forward, only to then slip steps back. Take 2019: after finishing strong the year before, Elon Musk decided todismiss 7% of the workforce. First-quarter deliveries weredismal. Customers and employees alike werewhipsawed by a shifting retail strategy, and the chief executive officer remained a magnet forcontroversy.

But after years of drama, there’s a growing sense among investors that Tesla is finally hitting its stride. The company reported a surprise third-quarter profit in October and the shares have been on a tear ever since.

Established automakers have taken their shots at Musk with so-called “Tesla Killers,” but no serious competition has materialized thus far. U.S. sales ofGeneral Motors Co.’s fully electric Chevrolet Bolt plummeted 47% in the fourth quarter and finished downdown 9% for the year.

During Tesla’s lastearnings call, Musk said he thinks the upcoming Model Y will outsell the S, X and 3 combined, without giving a time frame. He announced plans in November to build a third auto factory, near Berlin — thebackyard of German automakersBMW AG,Daimler AG andVolkswagen AG, whose initial electric offeringshaven’t drawn much demand.

China, the world’s largest auto market, is the big wild card for this year. Tesla said Friday that battery production for its cars there began in late December.

Local pack supply is the gating factor standing in the way of the plant boosting output. Tesla said it’s already managed to assemble almost 1,000 cars that are ready for sale. With more battery production, it will be capable of 3,000 a week, according to the company.

“Shanghai deliveries should be the next catalyst to drive volume growth,” Ben Kallo, a Robert W. Baird analyst with the equivalent of abuy rating on Tesla, wrote in a report. “Importantly, the factory appears to be ramping faster than we expected.”

Loup Ventures’ Munster said Tesla should meet what he says are Wall Street’s expectations for 2020. Analysts on average are predicting463,000 deliveries for this year — another 28% annual jump.

“If Tesla can successfully launch the Model Y,” he said, “they will have fully arrived.”

Email ThisBlogThis!Share to TwitterShare to FacebookShare to Pinterest
Labels: A, Appears, Corner, Tesla, to, Turn