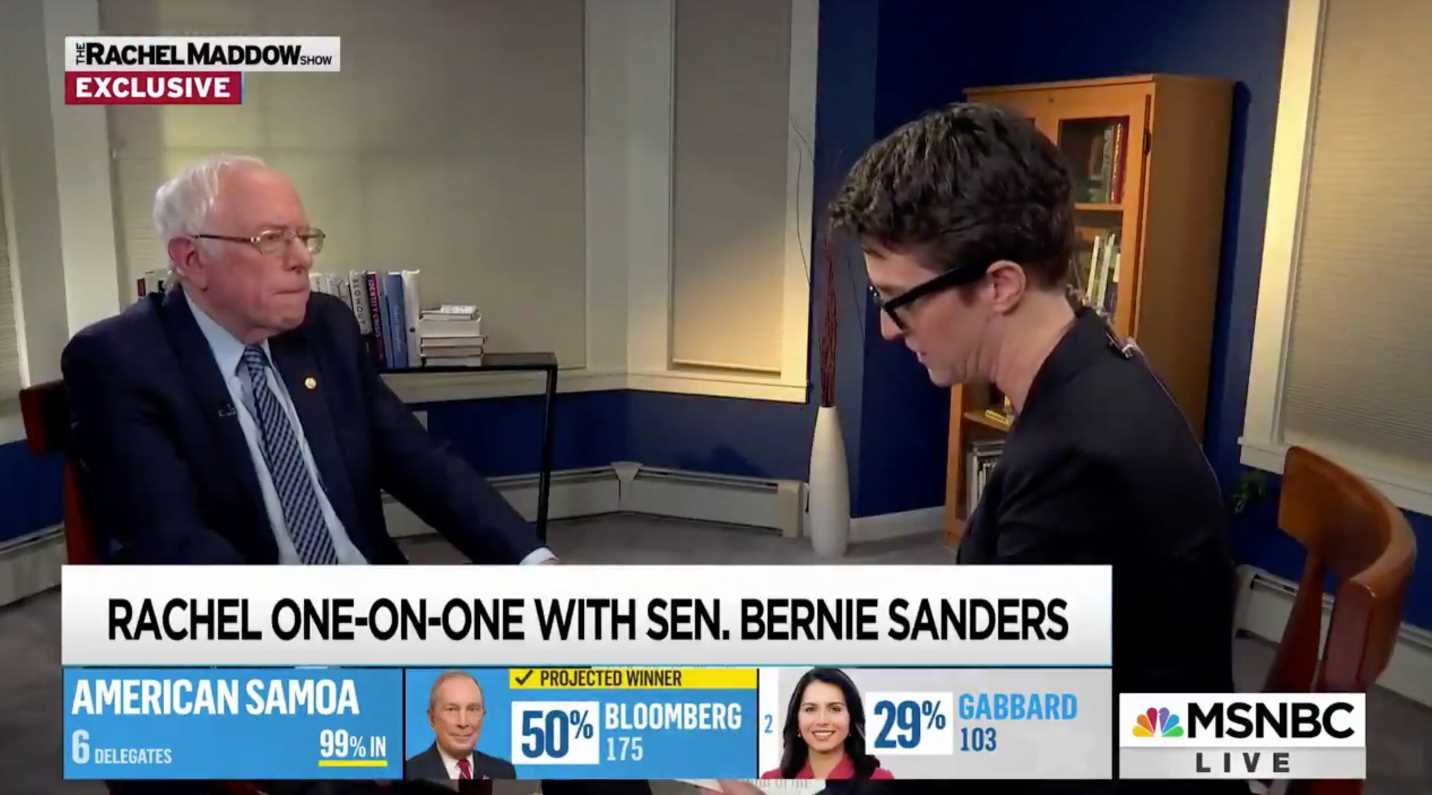 Sen. Bernie Sanders (I-Vt.) avoided reflecting on his general lack of support among Black voters by touting his performance with “people of color” in an interview the day after he received few Black votes in 14 states’ primaries.

The progressive Democratic presidential candidate sat down with MSNBC’s Rachel Maddow to talk about his campaign in his first interview since Super Tuesday. All but three states went to moderate front-runner Joe Biden, whose strong support from Black voters helped turn his campaign around.

“What is going wrong with your campaign when it comes to competing in the South and competing for Black voters?” Maddow asked Sanders.

“Well, let me just give you the other side of the story, is that in California, if my memory is correct, we received 39% of the votes of people of color, which were Latinos, Asian Americans and African Americans,” said Sanders, who’s projected to win the delegate-rich state. “If I’m not mistaken ― I haven’t studied these results ― we probably won the young people, young people African American vote, probably in all of those states.”

“But you in California are being well outpaced by Joe Biden among Black voters,” Maddow said, stressing the specific demographic she wanted to talk about.

Sanders replied once again with a deflection, saying that his campaign is “winning among people of color in a very significant degree” before Maddow cut him off to say she wanted to talk about Black voters.

“Let’s talk about Black voters, though, specifically because it has been a persistent problem, you know it was a problem in 2016, lackluster,” she said. “And it hasn’t gotten better.”

Earlier Wednesday, Sanders acknowledged during a news conference that Biden had significant success with Black voters on Tuesday.

“We are doing very well with people of color,” he said. “We are going to do better with the African American community.”

While the term “people of color,” or POC, has recently grown in popularity to identify nonwhite people and the struggles they deal with, it can also often erase issues that Black people specifically or more directly deal with. Equating “POC” with “Black people” can be viewed as needing to group nonwhite people together on an issue that directly affects Black people so that others will have more empathy or take it more seriously.

When Maddow pressed him during their interview to specifically talk about Black voters, Sanders shifted his angle to the former vice president’s relationship with Barack Obama, the nation’s first Black president.

“Look, we’re running a campaign against somebody who has touted his relationship with Barack Obama for eight years. Barack Obama is enormously popular in this country in general and in the African American community,” the senator said. “Running against Hillary Clinton, Bill Clinton was enormously popular. I don’t think if you look at some of the national polls ― in fact, there have been some polls recently ― that we were running ahead of Biden in the African American community. So it’s not that I’m not popular. Biden is now running with his ties to Obama, and that’s working.”

Maddow brought up the commercial to Sanders, asking if he believed Obama was part of the Democratic establishment he’s trying to take down. The senator again avoided answering directly, saying he’s not close with the former president but that he has “a lot of respect for him.”

Source: Read Full Article
Posted by BestNewsMedia at 12:30 AM

Email ThisBlogThis!Share to TwitterShare to FacebookShare to Pinterest
Labels: &#039;Peop, Deflects, Sanders, to