Why did Yes Bank have to be bailed out? 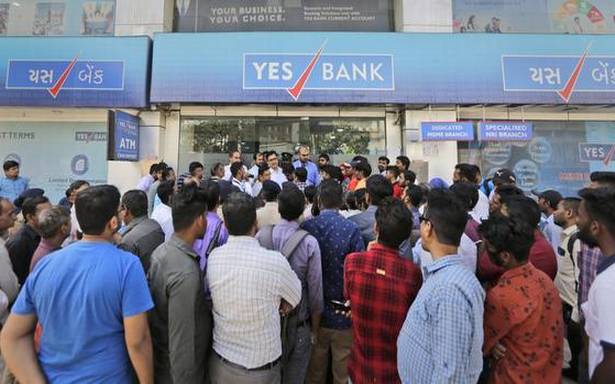 How will the Reserve Bank of India plan impact depositors? What are the implications for the banking sector?

The story so far: On the advice of the Reserve Bank of India (RBI), the government imposed a moratorium on Yes Bank with effect from 6 p.m. on March 5 up to April 3. Subsequently, the RBI superseded the private sector lender’s board and appointed as an administrator, Prashant Kumar, who was serving as chief financial officer and deputy managing director at State Bank of India (SBI). Mr. Kumar resigned from the SBI to assume charge as the administrator of Yes Bank. Under the moratorium, deposit withdrawals have been capped at ₹50,000. Within 24 hours, the RBI proposed a reconstruction scheme under which SBI could take a maximum 49% stake in the restructured capital of the bank.

Why was the moratorium imposed?

The banking regulator, while recommending the moratorium, cited a steady decline in Yes Bank’s financial position mainly due to the lender’s inability to raise adequate capital to make provisions for potential non-performing assets. This failing resulted in downgrades by credit rating agencies, which in turn made capital raising even more difficult — a vicious cycle that further worsened its financials.

This apart there were serious lapses in corporate governance.

The RBI said, “The bank has also experienced serious governance issues and practices in the recent years which have led to steady decline of the bank,” adding that it had been in constant engagement with the bank’s management to find ways to strengthen its balance sheet and liquidity.

“Since a bank and market led revival is a preferred option over a regulatory restructuring, the Reserve Bank made all efforts to facilitate such a process and gave adequate opportunity to the bank’s management to draw up a credible revival plan, which did not materialise. In the meantime, the bank was facing regular outflow of liquidity,” the RBI explained on March 5, laying out the rationale for the moratorium.

When did it all start?

As on March 31, 2014, the bank’s loan book was ₹55,633 crore and deposits were ₹74,192 crore. Since then, over the next five-and-a-half years, the loan book expanded fourfold to ₹2,24,505 crore as on September 30, 2019, at the end of the second quarter of the current financial year, while deposit growth failed to keep pace and increased less than three times to ₹2,09,497 crore. The bank is yet to announce results for the third quarter.

The exponential growth at Yes Bank during that period also came under the regulator’s scanner. The lender has substantial exposure to several troubled borrowers including the Anil Ambani-led Reliance group, Dewan Housing Finance Corporation Ltd (DHFL) and IL&FS. This resulted in the RBI refusing to grant its then Managing Director and Chief Executive Officer Rana Kapoor — also the bank’s co-founder — another three-year term after his tenure ended in August 2018. The RBI did not make public the reason for its decision to not extend Mr. Kapoor’s term. Finally he was given an extension till end-January 2019.

The tipping point probably came earlier this year when one of the bank’s independent directors and chairman of the board’s audit committee, Uttam Prakash Agarwal, resigned from the board in January citing governance issues. The RBI, meanwhile, had been taking stock of the developments at the bank on a regular basis for the last few months.

What will be the likely impact on depositors?

While deposit withdrawals have been capped at ₹50,000, there are exceptions under which a higher amount can be withdrawn, with the permission of the RBI.

The total withdrawal should, however, not exceed ₹5 lakh or the actual balance in the account, whichever is lower.

What about deposit insurance?

In case Yes Bank goes belly up for any reason, depositors will not lose all their money since deposits up to ₹5 lakh are covered under deposit insurance.

While the deposit insurance cover was ₹1 lakh till recently, this was increased to ₹5 lakh in the aftermath of the crisis at the Punjab and Maharashtra Cooperative (PMC) Bank Limited where caps too were set on deposit withdrawals. Finance Minister Nirmala Sitharaman announced the increase in deposit insurance in the Budget.

Will the developments at Yes Bank pose a systemic risk?

While the government and the regulator have asserted that the problem is solely related to this particular bank, ratings agency Fitch Ratings said the latest developments spotlight the governance risks in India’s banking sector.

It said, “There is a risk that the already poor operating environment for the banking sector could suffer further impairment if the government’s efforts to tackle problems in the bank fail to provide reassurance to depositors and investors,” while also assigning a negative outlook to India’s banking sector.

What is the way forward?

The RBI has come up with a draft reconstruction plan for Yes Bank which proposes that depositors’ funds would be protected. The employees would also have the same service conditions, including remuneration, at least for one year. However, in the case of key managerial personnel, the new board would be empowered to take a call.

The SBI, which has received board approval to invest in Yes Bank, will have to pick up to 49% stake, according to the scheme, at a price that is not less than ₹10 for each share having a face value of ₹2.

The investor bank (SBI) also cannot reduce its holding below 26% before the completion of three years from the date of infusion of the capital.

Email ThisBlogThis!Share to TwitterShare to FacebookShare to Pinterest
Labels: ba, bank, be, did, have, to, Why, Yes